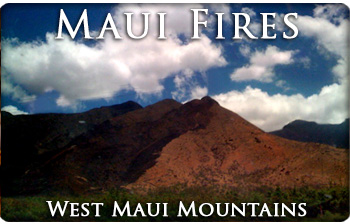 Maui‘s south and west side are drier than the rest of the island, which will often be the catalyst for serious fires.  In the recent past, we’ve seen quite a few brush fires flare up in the summer.  Some of these are natural, and others are started by arsonists.

As you can see in the photo, Maui fires can scorch huge areas in a short period of time.  This one is in West Maui close to the Pali (the winding, coastal cliff road from Maalaea Harbor to Lahaina.)  Personally, I’ve spent  a long night in my car due to a similar fire a few years back.  I was driving south from Lahaina, and the roads were completely stopped.  The road closure lasted until the next morning around 8am.

If you ever find yourself stuck in traffic due to a road closing from a fire, it’d be wise considering staying on the side you’re on.  Some adventurous people decided to drive around the back side of the West Maui Mountains.  This route takes much longer, but some of them made it.  Unfortunately, annoyed locals shut the road off after sometime.  This area is pretty dangerous to drive in traffic because it is often 1 lane on cliffy roads.  If someone is coming in the opposite direction, someone is in for a long, scary reverse.

Almost every year, Maui experiences some fires.  There’s not much you can do about it.  Stay away from it and hope it doesn’t cause too much damage or danger to homes and lives.  If you need to get anywhere, and you’ve heard there’s a fire, call (808) 986-1200 for road closure updates. You can also contact your Maui car rental office.

There’s a new fire today that’s been burning on the Maalaea side of the West Maui Mountains. it began last light and is burning hard still today. All of South Maui is covered in ash and smoke. For a while we all thought the sugarcane was being burned again and stronger than normal. Nope, it’s another fire!

The fire continues to blaze today. 1 fireman was taken in for smoke inhalation and many have been evacuated from Maalaea and the wind farm.

The Maalaea fire that started the other night is still going. I can see it from our lanai. I am glad to told your readers this “If you ever find yourself stuck in traffic due to a road closing from a fire, it’d be wise considering staying on the side you’re on” that’s the wise thing to do during this Maui Fires.

That’s so scary! Hopefully they’ll be able to put out the fires soon. It’s especially sad that sometimes these types of fires are started intentionally by arsonists… it’s terrible to think that someone would put so many lives at risk that way!